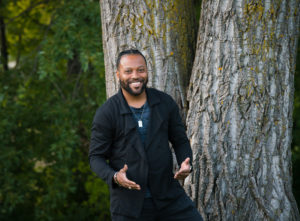 Born in Hattiesburg, MS and raised in St. Paul, MN. Leviticus has deep roots in the south, strong ties up north, and a strong background in the performing arts. By the age of 5 he was already performing in the Minnesota’s, “Black Children’s Theater”. Drama, music, and dance have been a forefront throughout his life as an artist. He is considered a cross between “Diddy”, who is known for being an entertainer with incredible stage presence and “Nas”, who’s known for his lyrical ability and the substance within them. Levi has performed at several noted venues in the Twin Cities. In July, 2008, he was a featured dancer/instructor at the Sant Andreu Teatre, Barcelona, Spain and in January, 2006, was the opening act on Carnival Cruise Lines for Tony Award-winning choreographer, Jason Samuels-Smith. Levi’s ability to stage large hip hop production pieces is one of his artistic strengths. He is the “master” hip-hop teacher and choreographer at Heartbeat Studios Performing Arts Center, teaching ages five to adult. He brings a mature and experienced aspect to hip hop for teens and adults, and brings joy to students in his classes for youth.