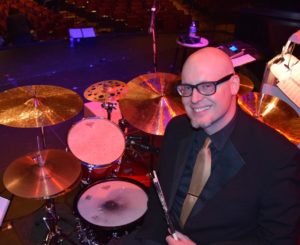 David served on the faculty of McNally Smith College of Music for 27 years and has guest-taught at the Berklee College of Music. He serves on the Percussive Arts Society Drumset Committee, is the Drumset Editor for the PAS Percussive Notes magazine and is a member of the Modern Drummer, Remo, and Vic Firth Educational Teams. David was presented the Legacy in Education Award by the YAMAHA Corporation of America in 2018 and, in 2020, was one of four renowned drummers selected by the NAMM Foundation’s Percussion Marketing Council to participate in their 25th Anniversary Lesson with a Master Contest.

David has authored Mastering the Tables of Time (“#1 Edu Book,” Modern Drummer 2009 Readers Poll), co-authored The 2 in 1 Drummer (2014 Modern Drummer & DRUM! Magazine Edu Book Nominee), both available from Alfred Music Publishing, and was “Drumming History and Analysis Consultant” for Jim Berkenstadt’s book, The Beatle Who Vanished~The Unsolved Mystery of Jimmie Nicol, currently being made into a major motion picture.